Sign up to get the latest news delivered to your inbox

Building A Future with Sam Lawson

For National Apprenticeship Week 2022, the topic this year was “build a future”. Here, we discussed building a future with Sam Lawson, our fourth year apprentice, and talked about his progress so far with CMP… 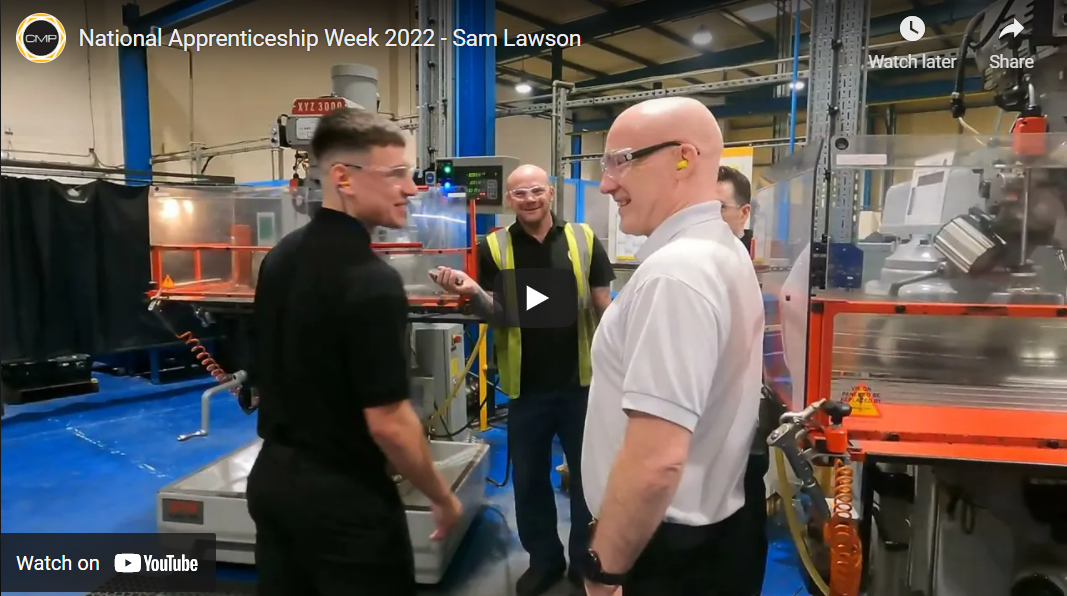 My first three years of my apprenticeship consisted of working on CNC machines and learning how to set, program and operate them. But most recently, I’ve progressed into a Production Engineer role.

To me, building a future is creating a pathway to the career that I want. So, in order to do this I need an understanding of what it is that I want to achieve.

Throughout my apprenticeship, I think I’ve grown as I’ve had to face a variety of new challenges and I’ve also had to perform under a certain amount of pressure which I’ve never faced before, such as carrying out tasks and producing jobs within a timescale. This has allowed me to grow as it’s tested my ability and everything that I’ve learned so far.

The thing which surprised me the most about my apprenticeship is how fast I adapted to the working environment. Transitioning from school into an apprenticeship full of new people can be quite daunting, but with the help of the colleagues and the training and support they provided me made that easier.

My apprenticeship has helped me to build a future as it’s provided me with further education which should benefit me in the future. With both of these, the training on the shop floor and also the education, I believe it will help me towards building my future.

With my apprenticeship, it’s gave me the tools and provided me with opportunities to progress into much higher roles as so far I’ve progressed into production engineer, but that’s just opened the door into potentially supervisor, managerial and other roles in the future.

My future goals for the company have changed whilst starting my apprenticeship as I’ve realised the opportunities are endless as long as you put the dedication in, so I’m hoping to continue to progress and put the work in and push myself, and hopefully achieve much more in the future, and have a successful career within the company.”

Chris Matthews “Sam Lawson is a fourth year apprentice here at CMP. About six months ago there was an additional Production Engineer position. Sam interviewed very, very well and he was very impressive right through the recruitment process. So he was successful and he started in the role about three or four months ago and he’s really hit the ground running, and he’s done an excellent job in the three months he’s been with the department. He’s a perfect example of how you can progress through the company”

Back To Latest News